STAY GROUNDED aims to exchange experiences, support each other, and campaign together for a reduction of aviation and its negative impacts. We also engage in fighting problematic climate strategies like offsetting emissions and biofuels. Our vision is a form of mobility that rests inside the planetary boundaries and allows a livable future for us and our children.

In order to build political pressure, we need to be many. 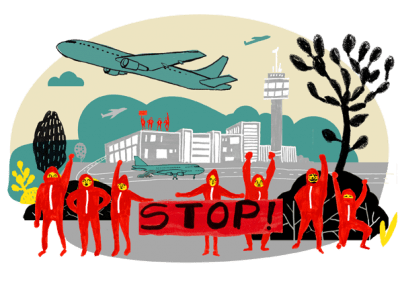 We realized that building alliances is hugely important in order to exchange experiences, support each other, come out of the shadow and involve more stakeholders. It can show that local airport struggles (often framed as “not in my backyard” conflicts) are not a single-issue, but that they are connected with the massive growth of aviation, the outrageous subsidies of its industry, the interest of an elite to cheaply fly very often, and the proposal of false solutions like offsetting and agrofuels. A modal shift of mobility can only be achieved by involving more and more groups and individuals to build pressure from below both locally and on a bigger scale by resisting, transforming and creating alternatives.

Our network consists of different organisations, activist groups and individuals from around the world (with a focus in Europe). It is coordinated by a group whose members are elected at each network meeting. Much work is being done voluntarily, while some is being paid. We have several active working groups, an e-mail list and an online library to share documents. Decisions that concern the whole network are taken in a consensus-based way. Since 2017, we have been organizing network meetings twice a year. The in-person meetings (until now always in Europe) allow for online participation, since we find it important that no one flies to the meetings.

How to become a member

We want to build a strong movement and involve more and more stakeholders to become active supporters of our position, to change the public discourse around aviation and to create political pressure. If you want to join our more than 160 members, find more information here.

Individuals who want to get actively involved in our network and support our position paper may sign up for our email lists and participate in network meetings. If you hesitate to become a member, you can still support us by different means.