Campaigns to reduce aviation – a movement for the privileged?
Webinar
mayo 26, 2020 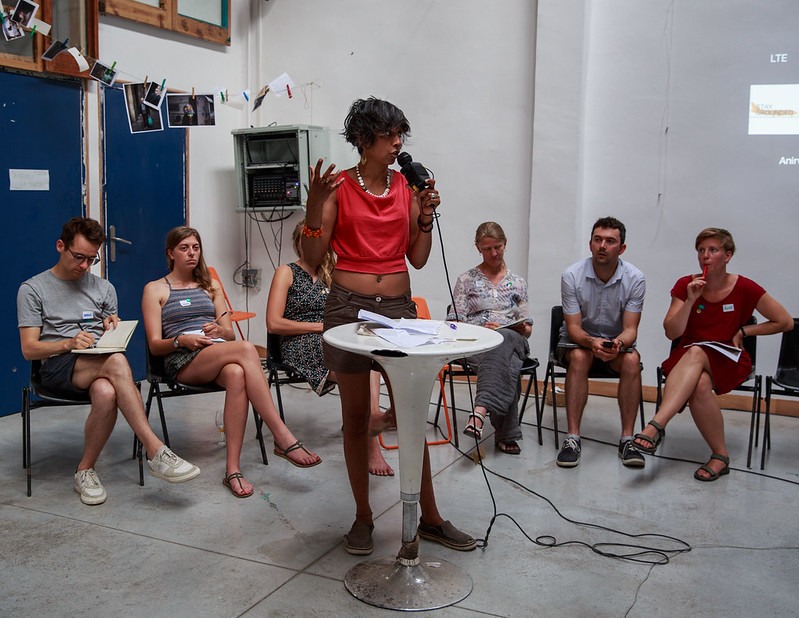 As a global network, Stay Grounded has members all over the world and the global solidarity work is central to our work. Still most of our member groups are in Europe and we always need to take care that this doesn’t shift our attention from the communities in the Global South, who are resisting against airport expansions and land grabbing and who in many cases have already been bearing the consequences of the climate crisis for a long time. Also within Europe and the Global North we need to pay attention to whom our messages speak and how they are framed.

In the webinar we tried to follow some critical voices asking whether our campaigns to reduce aviation – especially when it comes to whether individuals should decide to fly less – are maybe just speaking to the privileged and how they could be shaped in a more inclusive way.

During three great inputs we made our way from the bigger picture of how European/Western dominance and colonial structures are being reproduced in our movements and countries of the Global South, towards concrete ideas how to evaluate our messaging and communication.

In the beginning Tonny Nowshin, a degrowth and climate justice activist from Berlin, spoke about the climate justice movement in Europe that tends to be very white and – despite their reach for justice – is not free of reproducing racist and neocolonial structures. Giving examples from Extinction Rebellion in the UK and Fridays for Future she explained how those movements, that are dominating the media, have an inherent Global North perspective which often neglects the social and political reality of people not like them. She argued, that the way those movements became big and got world wide attention – in opposite to many people and communities in Global South countries who fight since years against the climate crisis and are not visible –   lies in the historic reasons of our specific world order. To speak to people from different backgrounds we would need to reflect the privileges we own and get input from different perspectives for our texts and websites.

In the second input Gabriela Vega Telléz from CPOOEM (Original inhabitants and NGOs eastern State of Mexico coordination in defense of land, water and its culture) one of our member groups in Mexico, draw the line from the suppression and exploitation of indigenous communities and the natural wealth around them during colonial times to nowadays. “Our current struggles reflect ancient struggles to improve the living conditions of our peoples in the face of the oppression and dispossession of those who have been our executioners, who impose their conditions to keep the population alive, even if in miserable conditions”. Aviation and the megaprojects that come along with it, are one example of this. Gabriela also stressed that while trains might be a good alternative in Europe, in their country they are fighting against the new Maya train, which destroys their territories and cultural heritage and is imposed by foreign capital and touristic interest. For the Stay Grounded Network she suggests to continue connecting movements around the world and put the focus on countering power structures and creating autonomy spaces.

Finally Sheila Menon from the UK, who has been active with Plane Stupid and #Heathrow13, spoke about how the reasons and relationships people have towards flying are very different. While on a global scale only a very small minority of people flies at all, so flying could generally be perceived a privilege, it is not always only the privileged who fly.  Let it be forced migration with flying being the only way to connect to one’s family or body disabilities that leave the plane to be the only way to travel without problems. For those people hearing that we shouldn’t fly at all – especially when it comes from a white and in other ways privileged position – might feel like another form of neocolonial or systemic oppression. She says that if we want the movement to speak to everybody and be broad and diverse, we need to take a close courageous look at our privileges, be patient to listen and to learn about frontline struggles and to people who are not like us. In our campaigns she encourages us to put the main focus on pressuring the industry and governments, because that’s where decisions are being made. If we could push the government to make it illegal to reward anyone for frequent flying and force the industry to disincentivize frequent flying, we would catch the worst people and would work for solutions that are more socially just. While for Sheila consumer based campaigns like pledge campaigns can have a place in our work, they should always be targeting those minorities worldwide, who are really privileged and use a communication and framing that is rooted in anti-oppression thinking. Her suggestions is to always state front and center: “We recognise that we live in a world with deep inequalities and economic and racial injustice and that it takes a great of privilege to fly. That there are many legitimate reasons to fly and some of them in direct response to these inequalities. So we are calling on those of you who have the privilege to chose to fly and invite you to chose not to fly!”