AviAction: A stopover in Lille, towards the degrowth of aviation
Actions | Members
octubre 28, 2022 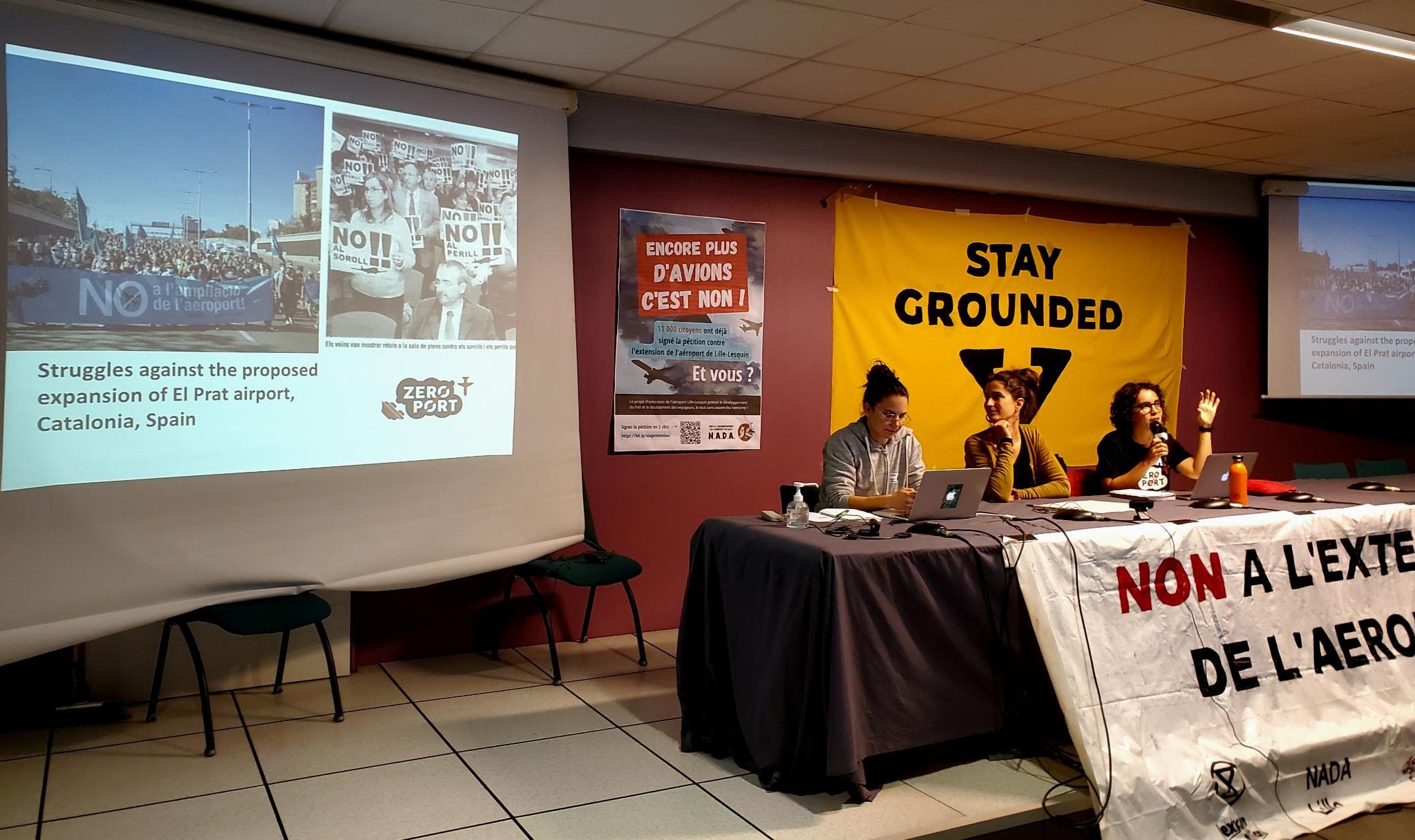 Over 200 people met in October in Lille, northern France, for the second international conference of the Stay Grounded network. Faced with the climate crisis and the aviation industry’s ecocidal plans, they imagined joint actions to stop the expansion of airports, reduce air traffic and defend life.

“I am here today celebrating my birthday,” announced Audrey Boehly, at the opening panel of the AviAction conference. As the applause ceased, she added: “My birthday as an activist”.

It is precisely two years since this Parisian mother, chemical engineer and science journalist, stormed the runway of Roissy-Charles de Gaulle Airport. In her first act of civil disobedience, she joined around a hundred people to say no to Terminal 4, a project that practically planned to build a new airport inside what is already the second largest and most polluting airport in Europe.

“If I allowed such a climate crime to go ahead, so close to our home, I wouldn’t be able to look my daughters in the eye.” Their house, stunned by 1800 daily flights (to which the expansion wanted to add 500), became a workshop for banners and posters. Audrey decided to dedicate her time and energy to the collective “No to Terminal 4“, which brings together two dozen groups and associations. In November last year, after a year of resistance and persistence, news came that the French government finally cancelled the “obsolete” mega expansion project of the main Paris airport. 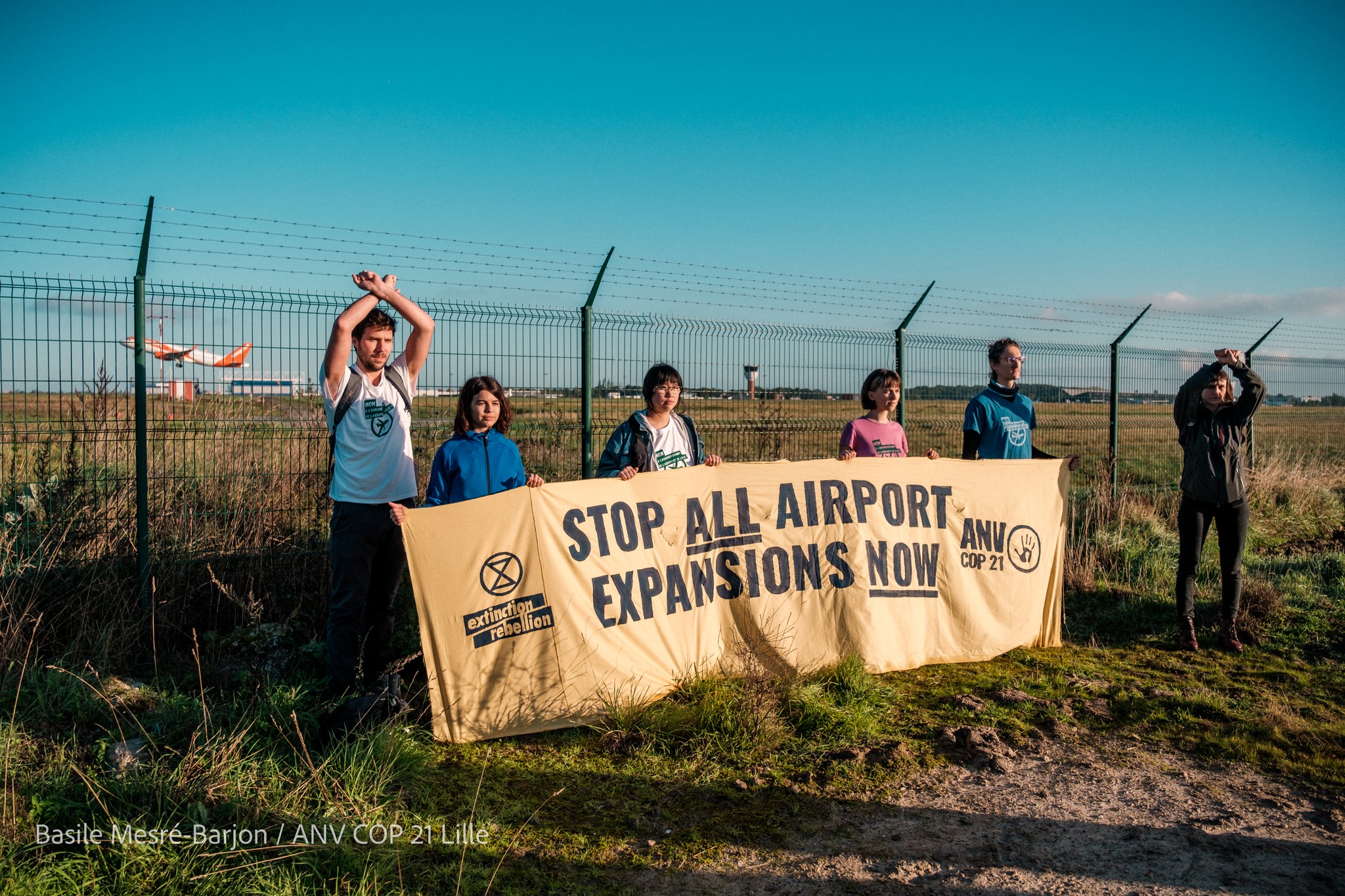 This past 5th to 9th of October, in Lille, Audrey joined over 150 people from all over the world, along with several dozen participating online, from the most diverse backgrounds, ages and occupations, from collectives, associations and NGOs that together give life to the Stay Grounded Network. Hosted by the association N.A.D.A. – No to the expansion of Lille-Lesquin Airport, the conference days provided the chance to share experiences and think together on how to act to degrow aviation – the most polluting and most unjust of all means of transport.

Sara Mingorría, researcher at the University of Girona, doctor in economy and activist of the Zeroport platform, spoke about the collective path local groups have undertaken in the face of the mega expansion project of Barcelona Airport. This opposition began at the Stay Grounded conference in 2019 and involved university researchers, agricultural unions and real estate investors (whose homes would devalue with the expansion), neighbourhood associations for the degrowth of tourism. On the 19th of September last year, with the official announcement that the project had finally been cancelled, a tide of tens of thousands of people took to the streets of Barcelona under the slogan «Less planes, more life!», in a tremendous celebration of collective power. «Activism is not just about fighting. It’s also about celebrating together,» said Sara. 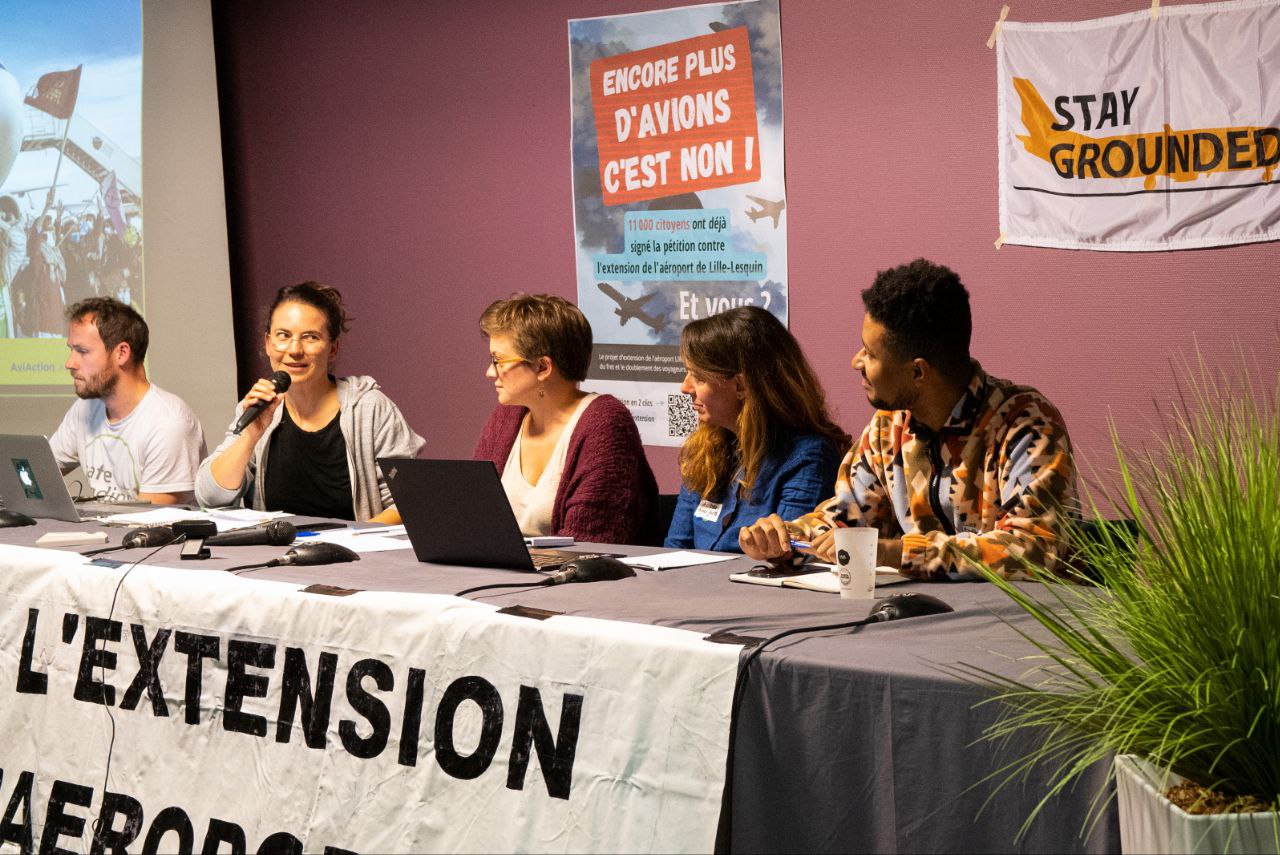 In another example of activism yielding wins, after a decade of land occupation of the Notre Dame des Landes mega project near Nantes, “against the airport and its world” a rebellious, self-managed, always imperfect community and territory has been cultivated. This occupation led to the cancellation of the mega project of the planned airport. Today, a collective bakery and community gardens, a library and a wooden lighthouse exist in the place where the elites wanted to impose tarmac runways and check-in counters, border control and an air control tower. Occupiers of the project area remind us to ask ourselves, “What if we win? It is fundamental, from the beginning, to imagine that we will win, to imagine the world we want to live in without the project”, shared two inhabitants of the ZAD of Notre Dame des Landes.

In yet another, and most recent win, the recent historic achievement at Amsterdam. Schiphol, the third busiest airport in Europe, was forced by the Dutch government to decrease the number of flights, to comply with pollution legislation and protect the health of the population. A precedent that may inspire to be able to set limits at airports like Paris or Lisbon.

Aside from stopping airport projects and flights, another major question opponents to aviation face is how to bring together the aviation workers and unions themselves, to make this industry land safely – that’s the aim of the Safe Landing group. Finlay Asher, an aircraft engine engineer, and Todd Smith, a former commercial pilot, seek to explain to their colleagues that the only way to secure long-term employment is to stop the growth of the industry and its pollution. «There is nothing worse for the economy and for job security than the climate catastrophe that aviation is causing,» Finlay says. «We built this industry, we operate it. And we can transform it,» he says, calling on his colleagues to join together in workers’ assemblies. Safe Landing has also contributed to dismantling the false solutions evoked by the industry using cold hard facts about technologies such as electric flights, hydrogen flights or biofuels, unveiling them as mere greenwashing tactics, but with the gravity of distracting the public from the real solution: flying less.

From global injustice to global solidarity

One thing the AviAction Conference made starkly apparent is «the urgency to act is ever more evident given this year’s climate catastrophes in Pakistan, which have caused such destruction and more than a thousand deaths, thousands injured and millions affected. In a people like others in Asia, Africa, Latin America, we do not consume or pollute at the level of the so-called first world countries. But we unjustly pay the consequences», said Gabriela Vega Tellez, member of the National Indigenous Council of Mexico.

«Aviation is an excellent representation of global injustice: an elite mostly from the North enjoy the advantages of flying while people mostly from the South, who have never stepped on a plane, deal with the destructive impacts of air traffic,» agreed Daniela Subtil of Stay Grounded. The Portuguese development and sustainability researcher has helped map conflicts around the world caused by the aviation industry and helped bring people and territories together in the common struggle to defend life. «Groups in Europe have a responsibility to fight together with comrades in other parts of the world who are resisting airport projects, agrofuel plantations, carbon offset projects, and mass tourism, to amplify and support their struggles – and at the same time learn from each other’s experiences.» 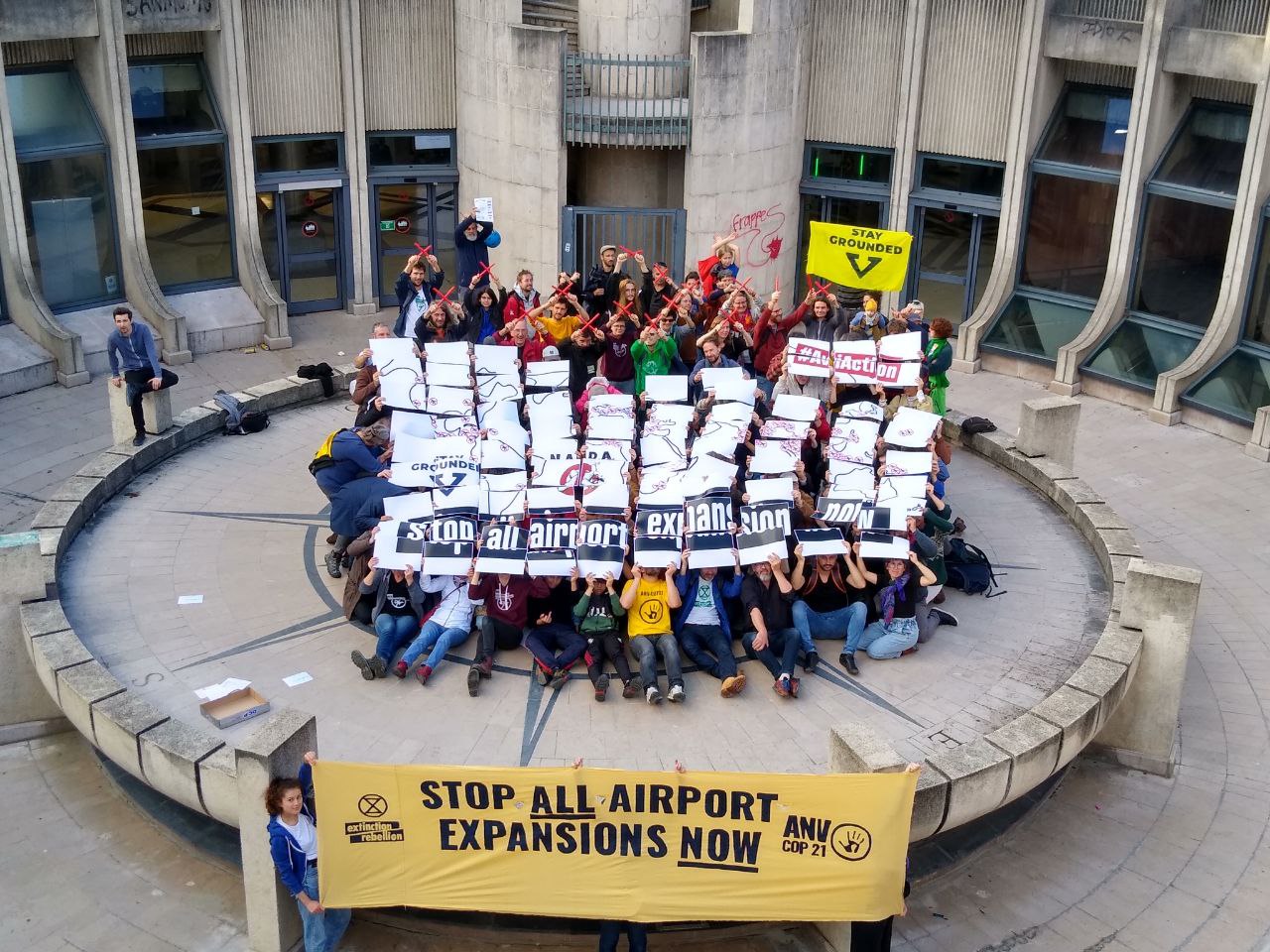 What airport conflicts demonstrate, is how globally interconnected they are to different peoples, territories and even financiers around the world. As an example of the interconnectedness, French multinational Vinci, which owns French and Portuguese airports, has just become the owner of 13 airports in Mexico, where social and indigenous movements have been resisting airport expansion in defense of their lands, water, and autonomy. These Airports, denounced Gabriela Tellez, are «built with taxpayers’ money on lands dispossessed from indigenous communities». Tellez recalls «how important it is, as peoples of the world and as a network, to raise our voices more and more in the struggle for a better world, ‘a world where many worlds fit».

AviAction activists in solidarity with local struggle in Lille

“Local resistance struggles against airport expansions anywhere in the world can only win if they fight as a global movement and together reject the growth of aviation everywhere,” Daniela Subtil stressed. On Saturday the 8th, the day before the end of the AviAction conference, after an action targeting the Lille airport in the morning and several stances of adbusting around the town, a crowd of people formed a map on the Place de République in the centre of Lille. It marked more than a hundred conflicts currently taking place in airports around the world. «Stop all airport expansion,» read a banner.

The afternoon sun was blotting out the autumn greyness of northern France, as hundreds of residents and activists gathered to the sound of drumming and fanfare, to rally for an end to the expansion of Lille airport – and everywhere else in the world. The aviation lobby wants to double the number of movements at this airport, which is already surrounded by several international airports such as Paris or Charleroi. But their intentions are being denounced and stopped by the work of NADA association, created in March 2021. 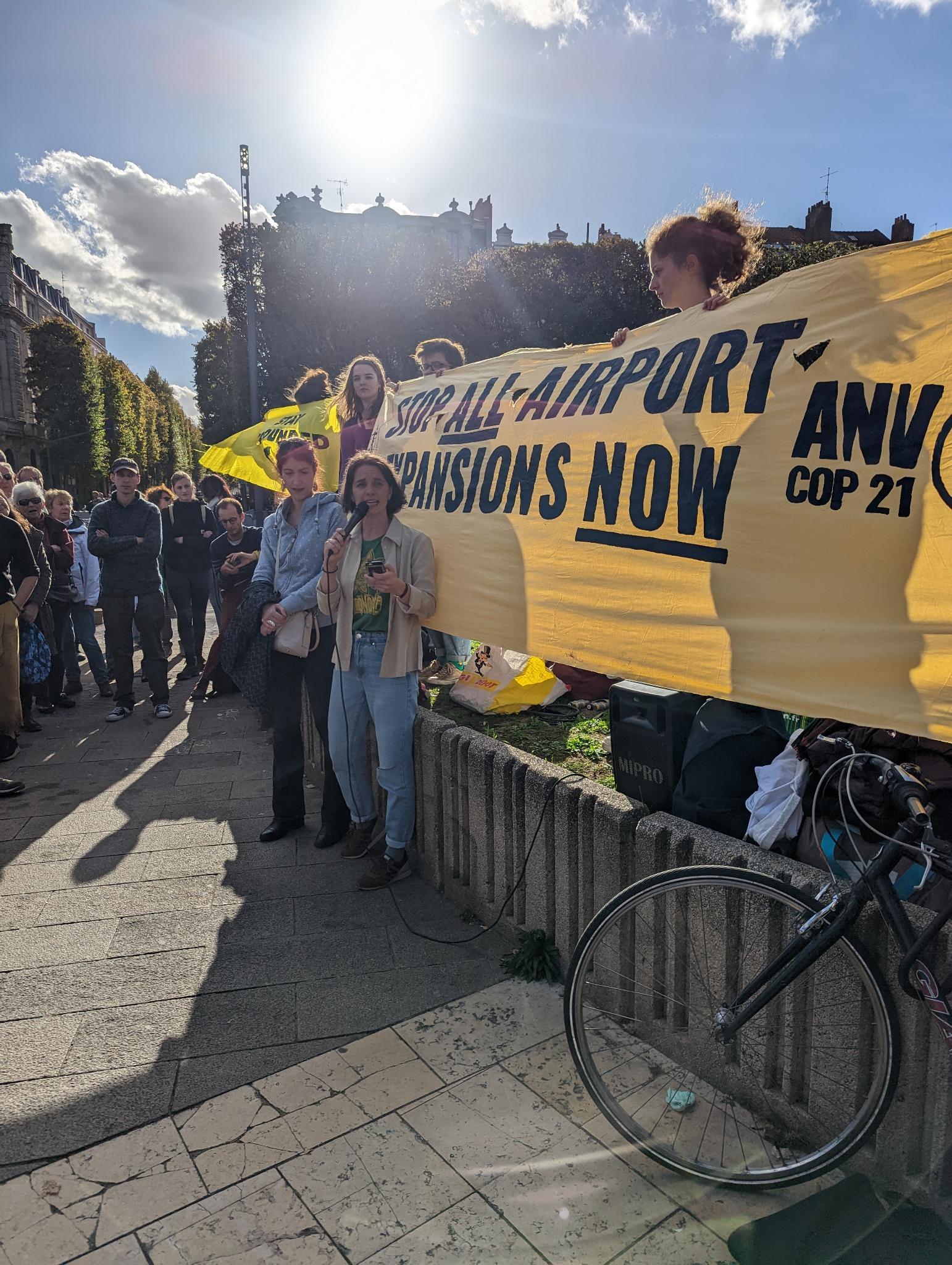 In front of the French comrades, Francisco Pedro, activist from ATERRA who has been persecuted by the Portuguese state for denouncing the expansion of Lisbon airport, condemned the plans of the French multinational Vinci to profit from ecological devastation by expanding Lisbon airport.

«Let’s not let the capitalist system cut us off from the vision of the world we want to live in: where we no longer have to move everywhere in all haste, where we ground our feet to the earth and travel less, slower and much better.»

After five days of shared experiences and building new strategies the activists and organisations that gathered in Lille promised to return to the streets soon, and with more creative and powerful actions targeting the climate-damaging aviation system.

Hosted for a week by solidarity people in the city of Lille, the participants headed back to their places of origin: by train, hitchhiking, bus, bicycle… without a single flight being taken.

On the sidelines of this meeting of leaders for justice, ecology and the future, the leaders of the aviation sector gathered for the annual assembly of the International Civil Aviation Organisation (ICAO) in Canada, where, in the face of the climate crisis, they again planned to increase air traffic, covered up with false solutions for carbon neutrality in 2050.

Learn more about the AviAction Conference 2022