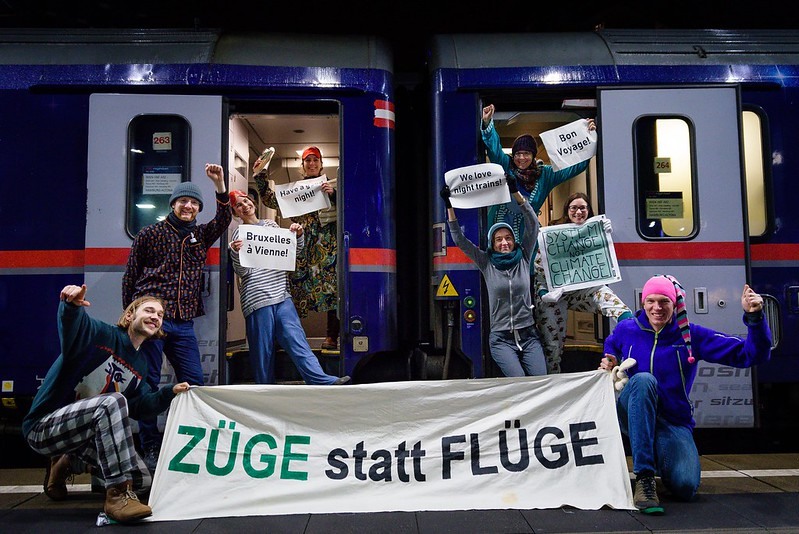 After more than 15 years of absence, the night train connecting Brussels and Vienna returns. Twice a week, travelers can now travel in their sleep between the two capitals. It is only a modest start, but in both cities Stay Grounded members welcomed the new night train as a positive step towards a more climate friendly transport system. The first departing trains were celebrated directly on the platform by activists wearing pyjamas.

On time, at 8:38 p.m. on January 19, the first night train of the new connection served by the Austrian railways ÖBB departed from Vienna to Brussels. «We welcome the initiative of the ÖBB. The expansion of night train connections is a small but important step to replace climate-damaging short-haul flights in Europe with attractive night trains! Trains not planes!” said Nino Gamsjäger, who came to wave off the train together with other activists from Stay Grounded member System Change, not Climate Change!.

“In times of climate crisis, we need a rapid reduction of flights, instead of the third runway at Vienna Airport, Austria’s most climate-damaging mega-project,” said Mira Kapfinger active at System Change!.

Step one of connecting Brussels with many European cities

Traveling the distance by train instead of plane reduces the emitted greenhouse gases by 90 percent. “The night train is therefore the climate-friendly means of transport par excellence that puts us on the trail of the future,» said Elodie Mertz of Greenpeace Belgium. “Our colleagues from Greenpeace Austria are working together with the Austrian railways ÖBB on better public transport. We also expect the Belgian railway company NMBS to make an attractive, reliable and sustainable train offer. Greenpeace Belgium and the other organizations are already offering them a hand.»

“This is just the beginning for us. Night trains from Brussels to various European capitals are an absolute must. For travelers, this would be an attractive alternative for flying, for distances up to 1500 kilometers,» added Bart Van Gotha of Zomer Zonder Vliegen.

«For short haul international distances, the climate solution is clearly the train,» confirmed Laurien Spruyt of Bond Beter Leefmilieu. “The technology for green electricity is available. Technology to make aircraft carbon neutral is not yet in sight.»

In order to enable climate-friendly mobility, international travel by train must be affordable for everyone – something that could be financed through the abolition of unfair tax privileges for air travel and the appropriate use of the funds gained. But over the past two decades, the night train almost completely disappeared from the scene in Europe due to the increasing and unfair competition with the aviation industry.

“The aviation sector is largely left out of the climate objectives and flying is virtually tax-free. Policy makers must urgently put an end to this and share the tax burden on rail and air traffic more fairly. The European Union must also promote cross-border cooperation between railway companies, so that, for example, there is more uniformity in infrastructure,» said Maarten Demarsin of Back on Track.

«CORSIA, the aviation CO2 compensation program promoted by the aviation industry, is pure greenwashing and serves as a licence for further aviation growth!» commented Kapfinger on the issue in Vienna. “In addition to a long overdue tax on kerosene, additional steps must be taken to prevent flying from becoming even more a privilege for the rich. A tax on frequent fliers would be a socially just measure: the more someone flies, the higher the tax,” Kapfinger continued.

The railway companies themselves do not go free neither. In recent years, they have only invested in a limited number of high-speed lines and cooperation within the international rail sector is very difficult. The Belgian government and the NMBS have an important task here.

The Austrian ÖBB is a European pioneer in the field of night trains. In 2016 the company launched the NightJet, with connections to Germany, Italy and Switzerland. With the introduction of the connection between Brussels and Vienna, a new promising step is being taken.