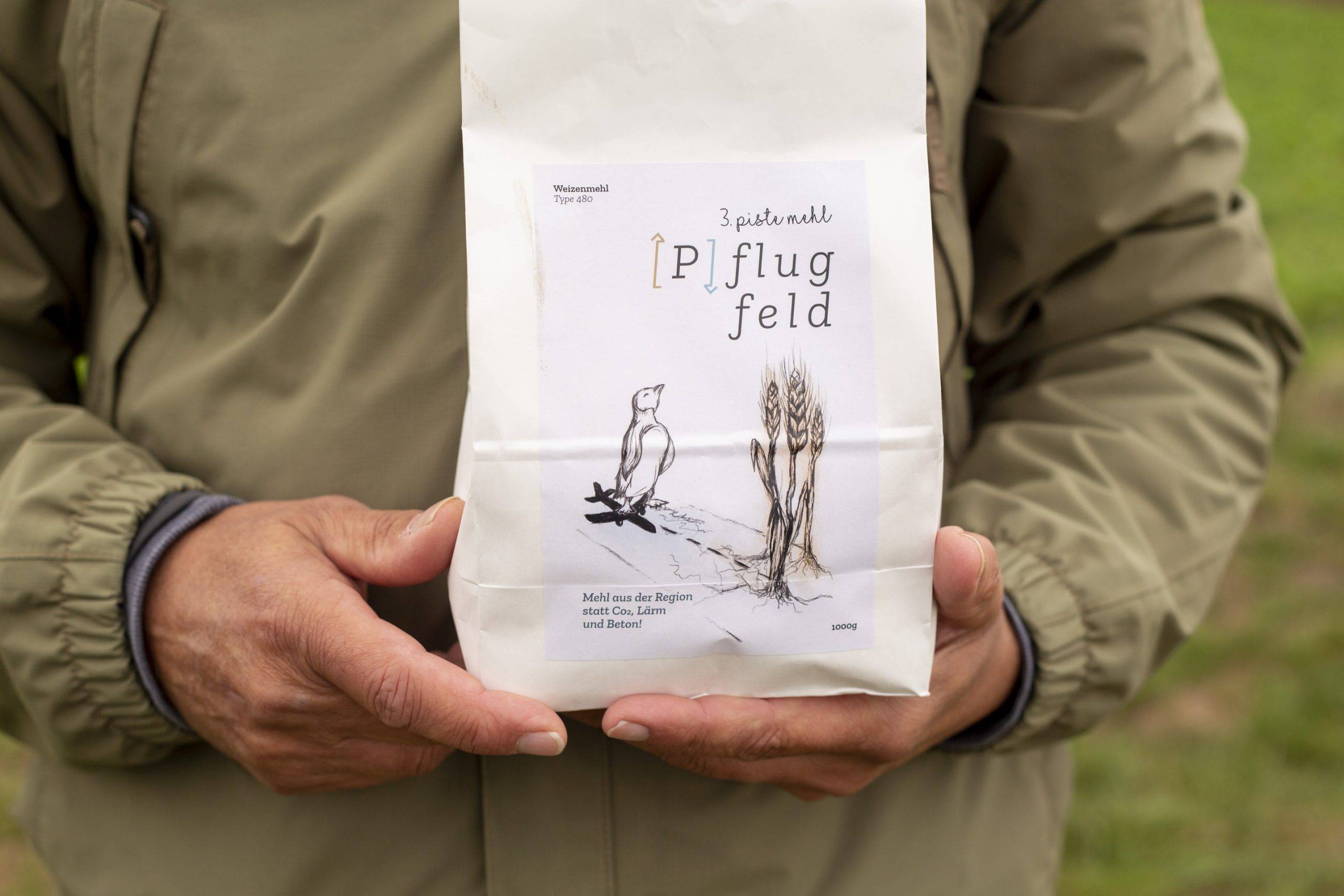 In Austria, a coalition of local producers, citizens’ initiatives and climate activists created the «3rd Runway Flour» made from organic wheat grown on the fields that Vienna International Airport wants to seal for a planned third runway.

With the 3rd runway flour, the resistance against Austria’s most climate-damaging mega-project has a new symbol and can be directly supported. From mid-December, the flour is available for purchase in small shops and foodcoops in Vienna and in affected communities around the airport.

Plants should grow on the land around Vienna International Airport, not the profits of a few!

«Transport is Austria’s number one climate killer and flying is the most climate-damaging means of transport. The Paris climate goals are not compatible with airport expansion, state aid for the airline industry and artificially boosted growth through incentives for low-cost airlines,» said Veronika Weckl of Stay Grounded founding member System Change, not Climate Change! at the online presentation taking place at the fifth anniversary of the Paris Agreement. «Despite collapsing flight numbers and the climate crisis, the airport is sticking to its destructive expansion plans. Instead of casting climate-damaging flight growth in concrete, we must now set the course for a climate-friendly mobility system. Plants should grow on the land around the airport, not the profits of a few,» Weckl continued.

Several farmers could lose their livelihoods due to the planned airport expansion and could be expropriated for the mega-project. «We have been farming these fields for several generations,» explained Josef Kolber, affected farmer and producer of the 3rd runway flour. «Our protest flour shows what can grow on these fields if they are not concreted over for the airport expansion. It is a sign against the third runway and for safeguarding of regional food as well as for the preservation of valuable soils,» continued Kolber, whose fields are among the most fertile soils in Austria.

The «3rd Runway Flour» is also a symbol for fewer flights, minimising the health impacts of air traffic (including particulate matter, ultra-fine dust and noise). «The reduction in flights this year was a real relief, because we suffer a lot from aircraft noise. We are fighting for a ban on night flights, as already existing in Zurich and Frankfurt, for example,» said Susanne Laschober from SOS Ostregion, an association of around 40 citizens’ initiatives around the airport and Stay Grounded member Citizen’s Initiative Rauchenwarth. «It is time for politicians and the owners of the airport, the province of Lower Austria and the city of Vienna, to finally take responsibility and take action,» Laschober continued.

According to the Austrian Transport Club (VCÖ), 1.1 billion litres of kerosene were refuelled in Austria in 2019, which means that the emissions from air traffic attributable to Austria rose to around three million tonnes. If the emission factor of 2.7 recommended by the Austrian Federal Environment Agency is applied to take into account their entire climate impact, air traffic is responsible for about nine per cent of Austria’s climate-damaging emissions. According to airport forecasts, a third runway would handle 460,000 flights in 2030. This corresponds to about one take-off or landing per minute. In total, the 3rd runway would take up 661 hectares. Almost 200 hectares would have to be sealed with concrete and asphalt for the runway and taxiways.