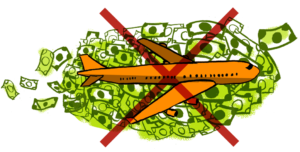 Vienna, 18th of March 2020: Today, an extraordinary meeting by EU transport ministers discusses the multiple demands by the aviation industry to cover their losses through Covid-19 with public money. The international Stay Grounded network, consisting of 157 member organisations, in a letter to the transport ministers, opposes these bailouts and instead demands public funding to be provided to take care of people, not airlines.

“While we are all in shock, huge sums of taxpayers’ money might be given to prop up environmentally damaging industries. Let’s not bail out shareholders and executives who have spent years lining their pockets, while hundreds of thousands of small businesses, owner-operated restaurants and creative artists go out of business. Crisis requires solidarity – let’s wash our hands of the virus, not responsibility”, says Magdalena Heuwieser from Stay Grounded. “It is unacceptable that the industry’s profits are privatised, while it expects its losses to be covered by the public.”

The airline industry has a history of tax avoidance and of seeking and obtaining special treatment while treating workers badly. According to Stay Grounded, the current situation requires collaborative planning for a just transition: employees in the aviation sector should receive training for climate friendly jobs, privatisations have to be reconsidered, and a shift towards climate-safe forms of travel has to be undertaken. It is no option to go back to business as usual after the Covid-19 crisis, as this would lead to an even bigger crisis.

“As bad as the Coronavirus is, its outcome will look like a bad cold compared to the consequences of the climate crisis, with entire countries on fire or underwater, mass starvation and forced migration”, says Magdalena Heuwieser. “If we can act collectively to stop thousands of deaths from the virus, surely we can do so to stop the millions predicted from climate disaster. Let’s use this unintended pause in air travel to rethink what we can do to stop far worse consequences from climate collapse, and flying’s contribution to it”.

The airline industry has made a fortune over the past decades, with higher growth rates than most other economic sectors – combined with soaring emissions. Aviation is already responsible for 5-8% of climate heating worldwide, when we include the climate impacts additional to the CO2. This is a huge portion, given that about 90% of the world population has never set foot on an airplane.